I’ve just booked myself a holiday! And where better than New York? I’m going for a week at the end of November to see the glorious Angels In America, so I need to start planning what I’m going to do. I’ll be there over Thanksgiving so the Macy’s Day Parade is a must, plus all the usual tourist traps. I might even squeeze in a spot of shopping!

I got bored at the weekend and realised I haven’t painted in months, so I sat down and did this. Sylar from Heroes, Acrylic paint on A3 canvas, 3 1/2 hours

It’s already been claimed by my brother, who has put it next to his bed alongside his poster of David Tennant.

I spent the rest of the weekend mostly watching films. I saw Inception which I thought was amazing, especially the ending, and I bought A Single Man on bluray and the El Mariachi boxset for £4! This week is more gigs gigs gigs and the exciting announcement of Placebo finally playing Brixton Academy again. I can’t wait.

It’s been a busy week for gigs for me! Not only did I go to The Prodigy at Milton Keynes Bowl over the weekend, I saw Klaxons and Ok Go on Tuesday and Wednesday. Klaxons were playing the intimate venue of Village Underground in Shoreditch to test out material from their forthcoming album ‘Surfing The Void’. By the time they took to the stage (after a curious punk support act called Flats) the room was packed with eager fans. Klaxons launched straight away into a frenetic rendition of new song Flashover, which set the pace for the evening. The crowd instantly turned into a sweaty mass of dancing bodies and were cheering and screaming loudly inbetween each song, which seemed to please the band as they kept thanking everyone profusely. The set consisted of a good mix of old and new, with fan favourites ‘Magick’ and ‘Golden Skans’ flowing seamlessly into the new sounds of ‘Valley Of The Calm Trees’ and ‘Twin Flames’. They saved the best for last with a rousing encore of the thundering title track from ‘Surfing The Void’ and closed on ‘Atlantis To Interzone’, which ensured that not a single pair of feet in the room were static.

Overall it was a fantastic return to form, although while the new material sounds heavier and more mature, it’s still very much in the tried and tested Klaxons style. I can’t help but wonder what was on the album they uncermoniously dumped last summer.

See the rest of the photos and a setlist here Ok Go were playing the Electric Ballroom as continued promotion for their current album ‘Of The Blue Colour Of The Sky’. I have reviewed them previously for GigJunkie, but this time I was just there as a fan, and I still came away totally enamoured. A lot of people would think of them as a bit of a gimmicky band, what with their low-budget viral videos and penchant for confetti and furry laser-covered guitars, but they pull it off with such a great enthusiasm that it’s hard to not enjoy it. It was pretty much the same set I saw before, with a large amount of the songs taken from the new album and a smattering of old fan favourites, but it was still a joy to watch. ‘This Too Shall Pass’ got a great reception due to the fantastic video that has been doing the rounds on youtube with the crowd helping Damian out on vocal duties, while ‘Last Leaf’ saw him head out into the crowd with his acoustic guitar.

I highly recommend that everyone sees Ok Go at some point in their life, or at least go and check out their Youtube channel for now.

See the rest of the photos and a setlist here

Right now is about the time that people start posting details of their San Diego Comic Con toy hauls on blogs and forums, and usually I am inextricably jealous and vowing that I will make it to comic con next year.

This year, however, I have my own haul! A lovely friend from Livejournal picked me up a set of the Rocket World Star Trek exclusives, and I’m really excited about them! I’m still jealous of all the people that picked up the Mustard Dunny and Skelanimals Hellboy plush exclusives, but there is always next year. (They are 7.5″ tall, no idea where they are going to go. I have some good ideas for photos involving lightpainting though)

I also ordered a black and white Capee and a series 4 blind boxed Labbit last week, plus my Forbidden Planet Doctor Who boxset should be shipping next week, so I have lots of new vinyl to photograph and play with. 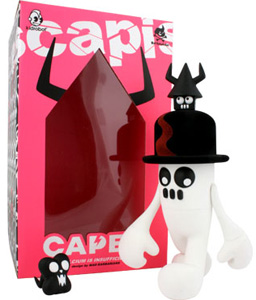 Welcome to the new look i heart my art! Technically I’m updating this while it’s still not quite finished, but I thought I would get a head start on blogging in an official capacity.

I’ve been blogging via Livejournal since 2002, but this is the first time I have written in a more public sense. I will continue a general record of my goings-on as well as updating with new photography and jewellery news and hopefully posting things that may interest you in the areas of gigs, music and vinyl toys.

I do currently keep a gig blog, but the reviews over there are of a more formal nature so I’m hoping to be able to post general thoughts on gigs and things on here.

Have a browse around the site, check out my links and my friends, and if you feel the need you can contact me through the link at the bottom of the page.