I went to see the Manic Street Preachers this week, playing a very very special gig at the O2 Arena to celebrate the release of their new singles compilation ‘National Treasures’. They played the entirety of their back catalogue of singles to a sold-out crowd, along with a whole host of special guests, so it really was an incredible night! Luckily they mixed up the order of the songs, otherwise there would have been a predictable lull somewhere in the middle. Hearing some of their best tracks playing out to an adoring audience over 3 hours just confirms to me that the Manics are still one of the greatest live bands. We were left with smudged eyeliner, covered in stray feathers and smiling as we walked back to the station. What a night to remember.

The (lengthy) setlist was: 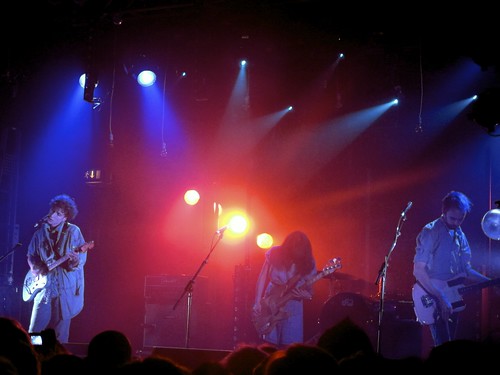 Last night I went to see Patrick Wolf at the Roundhouse, and it was a lovely evening for a number of reasons. Firstly, I had somehow won a meet and greet for before the show, so I eschewed the queue in order to huddle with a small group of people by the entrance to be let in early and meet the man himself. It was a bit of a strange setup with Patrick standing over by the merch stand, and the rest of us stood in a nervous bunch while we waited to go up one by one. I got my ‘The City’ vinyl signed and had a quick photo before I skipped out of the venue and back into the queue. I’m not great with meeting my idols so I kept the chat to a minimum, which suited me fine really! When I got back outside, I discovered that an old friend was also there for the gig and so I joined her and we spent the evening catching up.

The gig itself was the usual audio treat I have come to expect, with a nicely varied setlist and a wonderful backing band, but the stage setup was also a nice surprise. They had made use of the large Roundhouse space with a giant hand-drawn backdrop and some eclectic props scattered amongst the varied instruments. Add in Patrick’s penchant for over the top outfits and it really was quite the spectacle! I also got quite close to the front so I have some decent compact photos for once. I think this was a very grand, fitting gig to end the Lupercalia tour, although I’m certain that I won’t have to wait long before the next Patrick Wolf gig. (I like how much he had to bend down next to me!) My October gig extravaganza came to an end last night with an excellent performance by Miles Kane at the Electric Ballroom.

Before that however, was Bombay Bicycle Club at Brixton Academy last week. I am pleased to announce that the stage is back to normal, so the weird flattened out thing they had going on when I saw DFA1979 must have been temporary. Bombay Bicycle Club were supported by Dry The River, a band whom I have heard much about, but have never heard their music. They were fairly pleasant folky indie, and although I won’t be clamouring to buy their latest album they still helped the warm up the crowd and pass the time before the main act. Bombay Bicycle Club took to the stage shortly after 9pm and managed to play a staggering 20-song setlist. Considering there were only two tracks on offering from their acoustic ‘Flaws’ album, they managed to get through most of the material from their other two albums, which surely left even the most die-hard fan feeling as though they had gotten their moneys worth. Not only do they play well live, but they also really get into the music and engage with the fans, something that a lot of indie-folk bands tend not to do. It adds an extra dimension to the songs and the crowd seemed to be absolutely loving it. I was extremely pleased with the selection of songs and the closer of ‘What If’ had everyone dancing and cheering long after they had left the stage.

Shuffle
Your Eyes
Dust On The Ground
Bad Timing
Open House
Leave It
Lights Out, Words Gone
Rinse Me Down
Ivy & Gold
Evening/Morning
Beggars
Cancel On Me
Lamplight
How Can You Swallow So Much Sleep
Magnet
What You Want
Always Like This
The Giantess/Emergency Contraception Blues
———————————————
Still
What If

Miles Kane was performing two sold out nights at the Electric Ballroom, in support of his debut album ‘The Colour of the Trap’. The audience was largely made up of older people and so it didn’t really start to fill up until after 9pm, which meant we could get a nice spot close to the front before the support act, Folks, came on. Folks were largely forgettable and after a few tracks we found ourselves waiting impatiently for Miles Kane to take to the stage. It was a good performance, although fairly short as he only had his album and a few covers to rely on. The two covers (Jaques Dutronc and a more obscure Beatles track) mostly went over my head, but the rest of the set was more memorable. The highlights of course were ‘Come Closer’ and ‘Inhaler’ which got the biggest crowd reactions of the night and Miles proved that he is a solid performer and well worthy of all his praise.