On Thursday I set off to Edinburgh for the first time for one reason, to see Arcade Fire. My love of them has really grown since The Suburbs came out last year, and after their amazing Hyde Park gig a trip to see them at Edinburgh Castle was too tempting to resist!

I arrived on Thursday afternoon, and after checking in to my hostel I decided to go and check out the Castle to see where they would be playing. As I got closer I could hear the band playing their soundcheck, and as I got closer still I realised that the esplanade was totally open due to tourists visiting the castle. I walked inside to see Arcade Fire performing their soundcheck to a small audience of fans and confused tourists! I was in my element! They ran through their set and included the track ‘Modern Man’, which was sadly absent from the set later that night, and then rather jokingly Win asked if anyone had any requests. Some fans in front of me yelled out their favourites, and as the rest of the band left the stage, Win and Regine stayed to play a lovely version of ‘Cars and Telephones’. I’m pretty certain I will never see them play that live again so it was a very special moment. When they had finished they came down to the side of stage and milled around for a bit, talking to people and having photos taken. It was totally surreal, and I’m so glad I decided on a whim to go up there early.

The gig itself was amazing as well, well worth the trip up to Scotland! I was on the barrier so I got some nice photos plus I had room to enjoy myself. I think they played the exact same tracks as Hyde Park but in a different order, with Power Out and Rebellion in the encore (as they should be!). I also bought myself a ‘Who the fuck is Arcade Fire?’ tshirt to add to my collection of band tshirts with fuck on them! The next day I wandered around Edinburgh being a tourist, shopping and buying rubbish presents for people back home. All too soon it was time for me to go home, but I had a lovely time and I’d like to go back one year for the fringe festival. I am currently in France and the weather has been glorious! 30 degrees all week and blazing sunshine, it’s like being on a proper holiday. I’ve only been here for a few days but we’ve managed to pack a lot into that time. We went to a theme park yesterday and it was practically empty, so we had the run of the place. It was nice to go on all the water rides and cool down a bit. Afterwards we drove to Strasbourg for the Queens of the Stone Age gig, and the venue was even smaller than I had imagined; only about 1000 capacity. There were steps taking up the back half of the room so we stood on those to get a good view and to not get crushed in the crowd down the front. I was a bit apprehensive about the gig as they were going to be playing their self-titled album in full, and its really not one of my favourites, but they managed to pull it off well (even the bizarre Hispanic Impressions) and before I knew it, it was the encore already. We got a nice selection of tracks in the encore including Burn The Witch and Monsters In The Parasol. They ended on No One Knows, and I would have preferred to hear Go With The Flow instead, but it was still good nonetheless. I imagine they will play a lot more hits and mixed tracks at Glastonbury anyway. Overall it was a great gig and it was good to be so close and to see a rarely played album live.

I have an early flight tomorrow (4am UK time, oh god why) and then I pretty much have to sprint home, grab my stuff and get to the Excel Centre to set up. I have a feeling I will be living off Relentless tomorrow, but I am looking forward to it anyway.

Not much has been happening this week, as I have mostly been recovering from all the gigs and parties from the last two weeks. I went to see Atari Teenage Riot last Thursday at the Islington Academy, and it was great fun as I expected. Kap Bambino were supporting so I made sure I got myself there nice and early and was on the barrier for them. They got a surprisingly long set (I think it was about 50 minutes) which meant they could pack in a ton of new songs as well as some old favourites. The new tracks sounded awesome with a slightly more mature sound, and obvious influences from a much wider spread of dance music. There were a few other fans in the audience so I didn’t feel too out of place rocking out hard to a support act! After they finished I moved off to the side as I was anticipating quite a crush for ATR. Turns out I was pretty correct, although it was more of a happy pit of dancing people than an aggressive one. Atari Teenage Riot played tracks that spanned their career and also showcased some material from their new album. It was extremely infectious and I soon found myself dancing along without abandon after a few minutes. The crowd kept yelling for more and they ended up going over their curfew, but it was all worth it as they played two encores and ended the night on the anthemic Revolution Action.

Next week I have the whole week off work, and I’m going to France for a holiday to visit a friend. I’m going to see Queens of the Stone Age at a ridiculously tiny venue in Strasbourg as I couldn’t get tickets for the Roundhouse gig, and then when I fly back I have to immediately make my way to the Excel Centre for the MCM Expo. It should be busy!

On Tuesday I went to see Patrick Wolf at Koko (my 200th gig!) as part of his Lupercalia tour. It’s supposed to be promoting his new album, but as it’s not actually due out til May this tour feels pretty much the same as the gigs at the end of last year, with the fans only being familiar with the two singles ‘Time of My Life’ and ‘The City’. Although it had an almost identical setlist to the Bloomsbury Ballroom show, I much preferred last night due to a more responsive crowd and the inclusion of the seldom-played ‘To The Lighthouse’ and ‘Godrevy Point’, the latter being dedicated to Patrick’s father who was in the audience. Patrick also revealed to us that he chose that particular venue as it was where he met his current boyfriend, and described it as “love at first sight”. It was a decent performance, not the best I’ve seen, but by no means the worst, and I particularly enjoyed the more up-tempo rendition of ‘Who Will?’ and the remixed Hard Times. I have a feeling I’ll enjoy the newer songs once the album is out and I’ve had a chance to explore them more, as at the moment they seem in stark contrast to the older, more melancholic tracks. All in all it was a good night, and I have managed to bag myself tickets for his exclusive show at the Garage in May so there are plenty more Wolf gigs in my future.

Armistice
Time of My Life
The Bachelor
Tristan
Who Will?
Together
To the Lighthouse
Godrevy Point
Accident & Emergency
House
The Bluebell
Bluebells
The Libertine
Slow Motion
Bermondsey Street
The Magic Position
——————-
Hard Times (remix version)
The City

It was my payday yesterday and I celebrated by doing what I do best, spending lots of money! I bought myself a Tate membership with a guest pass, so myself and a friend can go and check out the exhibitions and then go to the members room for a drink afterwards. It lasts for 15 months, so even if I only go and see five paid exhibitions in that time, It’s already worth the cost. We’re going to start by going to see the Gabriel Orozco exhibition at the Tate Modern next week, and then there is a Miró exhibition opening soon as well.

I also paid for a flight to France in May to go and visit my friend for a Queens of the Stone Age gig. It’s currently my only holiday this year (excluding festivals) so I’m quite looking forward to it. I’m considering going to Dublin in August for my birthday but nothing has been confirmed yet. My Glastonbury ticket got paid off too so now I just have to book the time off work and wait for June!

Finally Tatty Devine had £10 off their name necklaces for April Fools Day, so I bought one at long last. I never bothered before because I had a whole host of other (cheaper) name necklaces and I could quite easily make my own acrylic ones. I finally caved into the temptation though at the lower price and got a purple necklace spelling out ‘Evilduck’, my nickname. I figured I have so many necklaces with ‘Amy’ on them that it was time for a change!

I’ve just booked myself a holiday! And where better than New York? 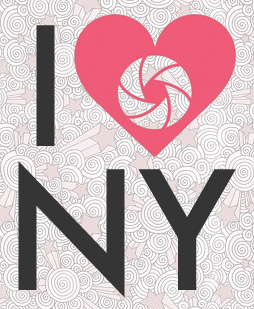 I’m going for a week at the end of November to see the glorious Angels In America, so I need to start planning what I’m going to do. I’ll be there over Thanksgiving so the Macy’s Day Parade is a must, plus all the usual tourist traps. I might even squeeze in a spot of shopping!