END_OF_DOCUMENT_TOKEN_TO_BE_REPLACED

I had an amazing moment yesterday. The official Placeboworld twitter and facebook pages posted a link to my review and photos of the Placebo Brixton gig from my gigblog! I like how they posted my personal link rather than the one on GigJunkie haha! I also had a few people filter back to this main site and buy things from my shop. Nothing better than indirect promotion from Placebo! 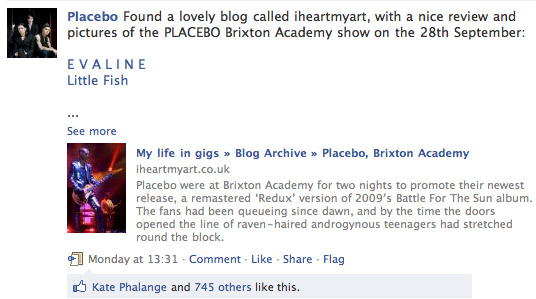 This week I received what I would describe as my personal holy grail of photopasses; Placebo at Brixton Academy. To say I was excited for this would be an understatement.

The first night I was just attending as a normal fan with my fellow Placebo enthusiast, Nikki, and my brother, so we got quite drunk and enjoyed ourselves. We made friends with randomers and danced around and probably annoyed the hell out of everyone around us, but it was great fun. I’m glad I still had the second night to go to as I didn’t remember it much!

The setlist was pretty standard, but they played All Apologies, Post Blue and new Teenage Angst so that was awesome. Not sure on starting with Nancy Boy, but it’s all good really. There were balloons with ‘Death and Fear’ printed on them, fuck tons of confetti, clowns firing tshirts from guns and all sorts of weird stuff. It was all filmed for a dvd and I can’t wait to see it! It’s been too long since the last one.

I was so nervous in the photopit, but I managed to get some good shots and not freak out too much. Security were ace and didn’t make us stow our cameras away, so I didn’t have to waste time inbetween acts. You can read my official review and see the rest of the photos on my gig blog.

I got bored at the weekend and realised I haven’t painted in months, so I sat down and did this. Sylar from Heroes, Acrylic paint on A3 canvas, 3 1/2 hours

It’s already been claimed by my brother, who has put it next to his bed alongside his poster of David Tennant.

I spent the rest of the weekend mostly watching films. I saw Inception which I thought was amazing, especially the ending, and I bought A Single Man on bluray and the El Mariachi boxset for £4! This week is more gigs gigs gigs and the exciting announcement of Placebo finally playing Brixton Academy again. I can’t wait.