The Reading Festival lineup was leaked early yesterday afternoon, and there was only a short wait until the official announcement confirmed that it was true. A lot of naysayers are claiming that The Strokes and My Chemical Romance aren’t big enough to headline, but everyone said that about Arcade Fire and Blink 182 last year and look what happened.

Personally I am very excited about the initial run of bands that are playing, as there are some of my favourites in there. Everyone in our camp has already agreed that The Offspring is the place to be on Friday evening! The announcements of Patrick Wolf, Death From Above 1979 and The Kills back up the predictions I had, and I’m so happy to be seeing them all again.

The best of the lineup so far:

Speaking of Death From Above 1979, they played their comeback show in a secret slot at the SXSW festival this weekend and it looked insane. Check out the footage below for the riots and massive crowds of people who tried unsuccessfully to get in.

Sad news, the Eighties Matchbox B-Line Disaster have split up. They were one of my favourite bands and it’s a great loss to see them go. Unfortunately they have had a lot of problems with their lineup over the last few years so they have finally decided to call it a day.

Here are two of their best songs (in my opinion).

Last night was the Oscars and for the first time I had seen 5 out of the 10 Best Picture nominees before the ceremony (Black Swan, The Social Network, The Kings Speech, Toy Story 3, Inception). I quickly crowbarred in Black Swan on Sunday evening and very much enjoyed it. Of course I was secretly hoping that The Social Network would win everything, but from the other awards ceremony results I was expecting The Kings Speech to come out as the main winner. I’m glad that Colin Firth finally has an Oscar as he really is a brilliant actor. A Single Man from last year has me sobbing every time I watch it. The most exciting win of the night for me was Trent Reznor for The Social Network’s soundtrack. It’s quite exciting to think that the man who created Nine Inch Nails now has an Oscar!

I didn’t manage to see any of the footage from the event (damn you, Sky), but I did enjoy the photos of James Franco in a dress! I’ll have to try and watch some of the other nominated films soon, with the exception of The Fighter because it just looks awful. Plus I can’t stand Mark Wahlberg.

I hope everyone had a nice time over the holidays. My main present was the new camera lens so I didn’t get much else in the way of gifts, but I ate a lot of food, drank a lot of alcohol and sang some bad karaoke. New Year’s Eve was spent in a similar fashion and I’m feeling quite tired today.

2010 was a good year for me and I managed to reach a lot of goals that I had set for myself. One of them was to do more gig photography, and I ended up shooting Amanda Palmer, Placebo and a whole host of awesome bands at Offset Festival. Another was to revamp this website and get my jewellery business off the ground, which has gotten off to a good start thanks to all my wonderful customers. I also wanted to make good progress on my Open University degree, and my 94% pass on my first unit has certainly bolstered my confidence.

Other highlights of the year include going to New York on my own and meeting Zachary Quinto, a whole host of awesome festivals over the summer, and seeing some incredible bands for the first time like the Pixies, Chemical Brothers and Suede. Here’s to hoping 2011 is just as good.

It’s been a bit of a difficult year for this, as a lot of my favourite bands didn’t release anything this year, so I’ve had to rely on new bands or unexpected surprises. You may be able to guess my number one album, as I’ve blathered on about it nonstop since it was released.

10. Klaxons – Surfing The Void
This was a nice follow-up from Klaxons, although slightly predictable. It was more of the same Klaxons formula that we know and love, but I feel they could have tried to push the boat out a bit more. The title track was a favourite of mine though.

9. Blood Red Shoes – Fire Like This
Not quite as amazing as their first album, but still pretty damn good. Blood Red Shoes make effortless post-punk garage rock that is anthemic and so danceable. Light It Up and Heartsink were fantastic choices for singles.

8. We Are Scientists – Barbara
I wasn’t sure what to expect from We Are Scientists after their last album pretty much divided opinions. On it’s first listen, Barbara looked like it was going to be mostly forgettable, but after a week or so a lot of the songs stayed firmly rooted in my mind. It’s definitely a grower, and I Don’t Bite was one of my songs of the year.

7. Crystal Castles – Crystal Castles II
This was another album which turned out to be a grower. In the beginning only a few tracks really stood out (most notably Baptism) but as I listened I ended up liking it more and more. They moved away from their trademark bleepy screechy sounds to give some more melodic vocals a try, and it definitely worked. They released a version of Not In Love with Robert Smith on the lead vocals and I was bowled over. It made such a gigantic change to the whole dynamic of the track! Another one of my favourite songs of the year.

6. LCD Soundsystem – This Is Happening
If according to the rumours that this is LCD Soundsystem’s last album, then at least they went out with a bang. I knew this was going to be a big album even before it was released and it didn’t disappoint. Absolutely packed full of tunes like Drunk Girls and Pow Pow, I love to put this album on and just get lost in it.

5. Foals – Total Life Forever
Foals did this year what The Horrors did last year: Ditch the direction of their mediocre debut album, and release a phenomenal second album. Who would have thought the band that brought us the mildly irritating strains of Cassius would go on to produce the beautiful Spanish Sahara? The songs are more strung out and quietly grandiose than on the first album and it generally feels like they have grown up as a band.

4. Gorillaz – Plastic Beach
This album is a wonderfully eclectic mix of styles, from the electronic 80s pop of Stylo to the oriental-rap mashup of White Flag. They use guest vocalists to their full, with almost every track having a different singer, and it works incredibly well and somehow doesn’t make the album feel disjointed. Standout tracks for me are Empire Ants and Rhinestone eyes.

3. Eighties Matchbox B-Line Disaster – Blood And Fire
With a revolving lineup of guitarists and their last full length album released 6 years ago, I did not have high hopes for this album at all. But it was a stomping, screeching, growling return to form and I love every song on it. They even managed to squeeze in a rousing singalong ballad in the form of So Long Goodnight.

2. Chemical Brothers – Further
Seeing this album live in its entirety with beautiful fullscreen visuals has probably coloured my opinion, but it’s near perfect. I think to be appreciated most it needs to be listened to in full, but the tracks still do work on their own as well. I challenge anyone to listen to Escape Velocity and not want to dance!

1. Arcade Fire – The Suburbs
Of course this was my number one! I’ve listened to it a ridiculous amount since it came out, and I still love it. A lot of people were bitching and complaining when Arcade Fire were announced as Reading Festival headliners, but this album has cemented their headliner status. Their songs are made to be seen in a large crowd, with everyone around you singing and dancing like mad. The Suburbs, Rococo and Sprawl II are probably my favourites.

Scott Pilgrim Vs. The World

Just a quick update before I head off to Reading for 5 days.

I went to see Scott Pilgrim last night at the ICA as part of the Ultra Culture Cinema screenings. They did a great competition beforehand where members of the audience had to act out the trailer (complete with cardboard props) and whoever was the best won some prizes. They threw the leftovers into the audience and I managed to catch a tshirt! It shall become my new sleeping shirt.

The film itself was brilliant. The whole first half is pretty much copied from the comics word for word, and most of the casting was spot on. Not sure if I liked Kim as much though, she seems less constantly unimpressed in the comics? The end half had been tweaked to make it fit into the length of the film and I think it worked well. They also used a lot of clever little bits like the name labels and split screens to give it a comic book feel. On the whole it was highly enjoyable and I think I’ll be going to see it many more times!

Just a few more things to mention about it; first is the soundtrack. Beck does the Sex Bob-omb songs, Metric do The Clash At Demonhead and Broken Social Scene are Crash And The Boys. This in itself would be amazing, but there are also a whole host of other great tracks making up the soundtrack, from The Rolling Stones to Blood Red Shoes. I’m not usually one for film soundtracks, but I downloaded this one as soon as I heard the tracklisting.

Secondly, Mezco have got the toy license for the series, and have not only made some fantastically cute Ramona and Scott plushes, but a Scott figure was previewed at SDCC! No word on a release date yet for the figure, but I’m hoping they do a whole series of them. 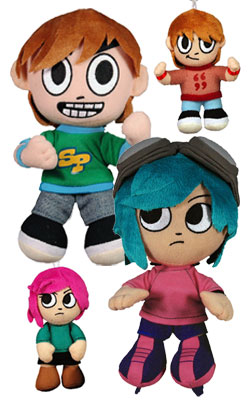 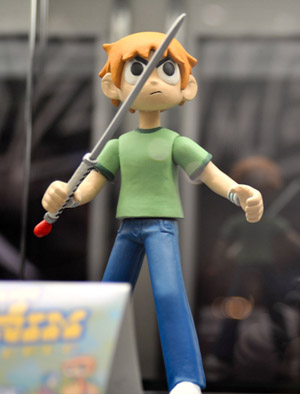