Last night was the end of an era for me; Harry Potter and the Deathly Hallows Part 2 was released at the cinema.

I’ve been a massive Harry Potter fan since the first film came out 10 long years ago. I went to see it the week it was released, and immediately begged my parents for the first four books as a Christmas present afterwards. I’ve read all the subsequent books on their day of release and seen all the films in the first few days they have opened and have become enraptured with this magical world. I have in particular become enamoured with the pre-Harry Potter era of the Marauders (the schooldays of James Potter, Sirius Black, Remus Lupin and Peter Pettigrew and the events of the first war) through various well-written fan interpretations, so I knew already that the deaths of Remus and Severus would hit me hard. That’s an understatement really, I pretty much sobbed like a baby throughout the whole second half of the film!

Overall I think it was one of the best Harry Potter films produced, although I won’t go into a nitpicky assessment of how it varies from the books, as I have come to accept that the films and books are two completely separate entities. It was nicely paced, didn’t miss out too much important information and I think it provides a very satisfying conclusion to the eight-film epic. The visuals were stunning and some of the one-liners from favourite characters were particularly memorable. As we went to a midnight screening, the audience were really getting into it and cheering at the best bits, which added a nice atmosphere to it. Luckily it meant that I wasn’t the only one crying at the end!

Now I think it’s time to hang up my wand, re-read the books and wait in vain for a prequel book. Girl walks into a bar

Yesterday Tatty Devine had a special 24 hour offer for free postage on their website. I’ve had my eye on the newly restocked Arghhhhh necklace for a couple of days, and this was the push I needed to buy it! It’s one of those pieces from an older collection that I loved, but never got around to buying before it sold out. I’m so glad I had the second chance to buy it. 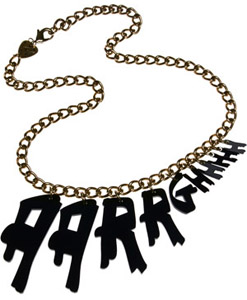 It was Pancake Day (as well as International Women’s Day, strange coincidence) on Tuesday, which meant getting out the eggs, milk and flour, and a big jar of nutella of course. My brother tried to take charge (having been a pub chef until recently) but his efforts just ended in a half burnt/half undercooked greasy mess, so I took over with my expert pancake skills. The best recipe I’ve ever used was one my old French housemate taught me, which involved copious amounts of rum and leaving the batter to sit for about an hour. Sadly we had no rum and not enough time so we had to just make do, but they still turned out pretty well. I left the flipping to the others though as last time I tried that, the pancake just ended up on the floor.

This week for some reason, the Triforce necklaces have been selling like hotpancakes. Good thing we restocked them recently! Maybe February is when all the Legend of Zelda fans were born.

This Friday sees the premiere of the worlds first feature film made for release via the internet. ‘Girl Walks Into A Bar’ is an 80 minute comedy that follows strangers in ten different bars across Los Angeles and how their stories connect over the course of one evening. It features stars such as Josh Hartnett, Danny DeVito, Rosario Dawson and Zachary Quinto, and is released for free on Youtube on Friday 11th March. Check out the trailer below, I think it looks like it will be great!

I went to see Richard Ayoade’s directorial debut, Submarine, on Friday at the ICA for the latest Ultra Culture Cinema instalment, and good times were had. To quote the free zine we got inside, “I saw it two weeks before it opened, and got a free custard cream chocolate bourbon in the foyer”. It’s a coming of age story set in Wales, about a boy who struggles with his feelings for his unromantic girlfriend and tries to prevent his mum from having an affair. It was truly a beautiful film, full of laughs and touching moments and the melancholic soundtrack by Alex Turner fit perfectly. My friend was most pleased by the free bottle of Irn Bru she got given for being Scottish. I would definitely recommend that everyone see it anyway.

I have realised that my 199th gig has been and gone, which means my next will be my 200th! Currently it will be Patrick Wolf at Koko, which is a pretty awesome 200th gig in my opinion.

At the weekend my friend decided to have a Mexican-themed party as we were poor and didn’t want to go to the pub. We probably ended up spending more money on tequila and sombreros, but it was so much fun. There were stick on moustaches galore, tequila-filled water pistols and more chilli than you can shake a pinata stick at. Here is a selection of photos from the night.