The monkeys are coming

I got bored of having pink hair, so I whipped out the dye this weekend and did it purple. This is Manic Panic Ultra Violet, with some of my Special Effects hot pink showing through from underneath. I love the colour but I remember how hard it is to maintain, so I may switch to a darker colour with more staying power. Last night I went to see Does It Offend You, Yeah? at the new venue XOYO in Shoreditch. It almost didn’t happen, as my ticket hadn’t arrived in the post and Ticketweb weren’t replying to my emails. Luckily, 5 minutes before I left work I got an email back saying they had put my tickets on the door. I arrived late anyway as the only support act listed were DJs, and that usually bores me to tears at gigs, and my tickets were waiting at the door for me. Unfortunately although Does It Offend You, Yeah? were supposed to come on at 9pm, for some reason they were running late, so I had to put up with some god awful dubstep DJs for half an hour. All the hip, young 18 year olds appeared to be enjoying themselves, whereas I was bored to tears. They ended soon enough and then it was time for the main act.

It was the band’s first headline gig in about 8 months but they were playing with a renewed vigour. Losing members and going on a break didn’t make them rusty, it only made them stronger. The set was very new album heavy, with some of the tracks seeming almost familiar already as they have been previewing them for the best part of a year. The standout track was definitely the new single ‘The Monkeys Are Coming’ with its catchy chorus and pounding basslines, but there was plenty of room in the setlist for older favourites as well. As the band trooped off stage after the last song, the deafening roars and screams of the audience continued until they were coaxed back out to play an unplanned encore. We bounced around gleefully one more time and then it was finally time to leave, sweaty and sated.

does it offend you yeah, hairdye, purple, xoyo

Teapots are the best alcohol receptacles

This week I have mostly been playing the new Sims 3 expansion, as my brother has received the new Call of Duty and has taken over our internet connection. Woe is me! I have created a vampire rockstar celebrity who has a penchant for tight leather trousers. I think he may be channelling Lestat.

On Wednesday I had the day off work to go to the O2 Arena with my dad and brother to see Linkin Park. I was a bit apprehensive, as I don’t know much of their new material, but it turned out ok in the end. Does It Offend You, Yeah? were supporting which was awesome, and their newer songs sound better every time I hear them. Can’t wait for a new release!

Linkin Park came on at about 8:30, which felt stupidly early for a gig! The first part was mostly new tracks, interspersed with a few choice hits to keep the crowd going. Then they got onto the better (in my opinion), older stuff and all was right. I felt like a 14 year old again screaming along to Crawling and One Step Closer! All in all it was an enjoyable experience, but probably not one I would pay for again as I really didn’t connect with the newer music. Plus we were on level 4 in the nosebleed seats, and I had to sit down every other song to stop myself feeling too dizzy.

On Thursday night myself and a friend made our way to the Horse Hospital in Holborn for an exclusive PureHMV screening of the new Mighty Boosh documentary, The Journey of the Childmen. As we took our seats in the tiny room, we were delighted to find free boxes of popcorn and chocolate bars on our seats. Imagine our joy when we found out the bar was free too! Needless to say much alcohol was drunk, and by the time Oly Ralphe, Noel Fielding and Rich Fulcher appeared to introduce the film, we were quite merry! Although not as drunk as a loud woman at the back who kept calling out nonsensical things. The documentary was very enjoyable and was a nice look at the hectic touring schedule they experienced, with some pretty animation and odd bits thrown in. Well worth a Christmas buy. It was also rather surreal to watch it with Noel Fielding sat right behind me giggling at everything on screen as well. 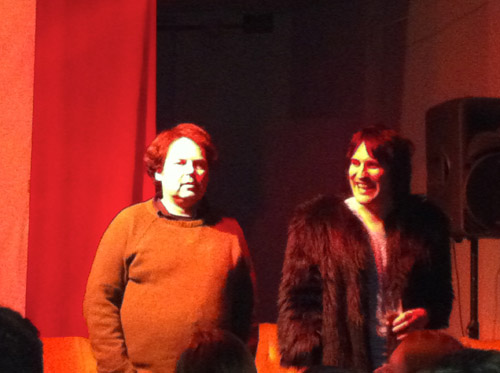 On Friday we continued the drinking theme with a night out in Colchester, and discovered an amazing bar that served shots from a teapot! Once you go teapot, you never go back. 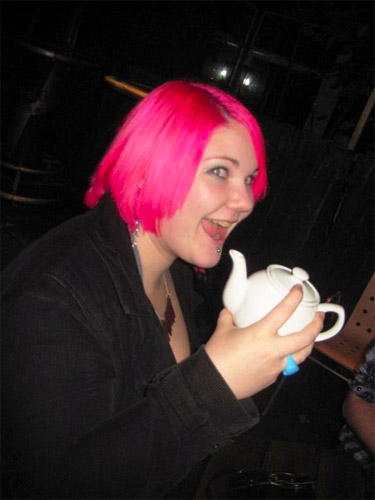 On Thursday I went to the Garage for the Relentless Energy Sessions. Chrome Hoof, Does It Offend You Yeah? and The Sounds were all playing, and I got the tickets from my PureHMV account so I thought it would be a nice free night. It turned out to be a bit weird, because when we got inside it was only about half full and stayed that way for the rest of the night. Most of the crowd were just confused by Chrome Hoof, and although a section at the front livened up for Does It Offend You Yeah?, they quickly left after they had finished. By the time The Sounds took to the stage at around 10pm the room was about a third full and looked like a school disco gone wrong. It just made me feel uncomfortable really and I couldn’t get into the music, so we ended up leaving after about 5 songs. I don’t know if it was lack of advertising, or if people just weren’t interested, but it seemed really strange to me. We enjoyed Does It Offend You Yeah? anyway so the night wasn’t a total loss. They are supporting Linkin Park in November so hopefully I’ll see them with a bit of a better crowd next time.

On Friday afternoon I got an exciting email come through. After roughly 4 years of trying, I have finally got tickets to a recording of Never Mind The Buzzcocks! It’s for 2nd November and my boss has agreed to let me leave at 3pm so we can go and queue and guarantee our seats. I’m so excited, I hope they have good guests!

Today I went shopping to find some bits to finish off my Halloween outfit. Can you guess what I’m going to be? 😉 I also took a look in the 99p store (as I usually do, to see if they have any good bargains), and they had the Star Trek glasses that the American Burger Kings were giving away last year. I got the Spock and Kirk ones as we don’t have much room in our cupboards, but they all looked awesome. This week I have lots of gigs coming up. Carl Barat on Wednesday at the Scala, Manic Street Preachers on Friday at Brixton Academy and The Eighties Matchbox B-Line Disaster and Robots In Disguise on Sunday at Heaven. I also have a Halloween party to go to on Saturday so it’s a very busy week for once. Luckily I get paid soon!